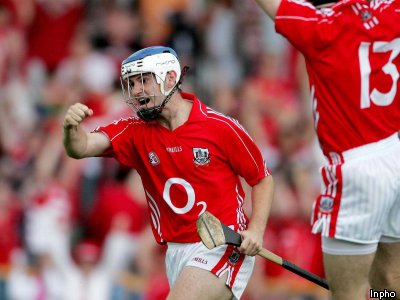 KIERAN ‘Fraggie Murphy’ will captain the Cork hurlers in 2010. The appointment of the Sarsfields {joomplu:90 left}forward was announced this week, and he replaces John Gardiner, who skippered the team for the past two years. Murphy becomes only the second player to be chosen since the decision was made to alter the method of appointing captains in 2007. Prior to that the county champions had the right to appoint the captain of both county teams, but the task was entrusted to the team management two years ago.

Gardiner and Graham Canty were the first two players to be chosen under the new system by Gerald McCarthy and Conor Counihan respectively.

It’s expected that Canty will continue as football captain in the year ahead, but Denis Walsh has opted for Murphy in 2010, who, with Sars winning the county title in 2008, would have been installed as captain had the old system been in operation last year.

Murphy was earmarked as a potential senior star following his outstanding contribution to Cork’s AllIreland minor success in 2001 when numbered among his colleagues on a team skippered by current rugby international Tomas O’Leary were other future seniors John Gardiner, Setanta O’hAilpin, Cian O’Connor, Martin Coleman, Kieran Murphy of Erins Own, Kevin Hartnett and Shane Murphy

He made his senior debut in 2004, and he has been ever-present on the squad since then, playing in three All-Ireland finals, and winning successive medals in 2004 and 2005. Last year Murphy was a regular at corner-forward, and was one of Cork’s best players in the first half of the All-Ireland qualifier against Galway.

Primarily due to a lack of service, he didn’t make a similar impact in the second half, but it was generally felt that he was a little hard done by when called ashore before the finish.

Presumably, the fact that he was an inspirational captain during Sars’ march to county championship glory in 2008 was a factor in prompting Denis Walsh to hand him the role of Cork skipper this year.

He becomes the first Sars’ clubman to captain Cork since the legendary Paddy Barry, who led the county to All-Ireland success in 1952, and had the honour of skippering the side again for the 1958 championship.

No Responses to “Fraggie assumes the captaincy”