Sarsfields U15 are on the road to the County Final 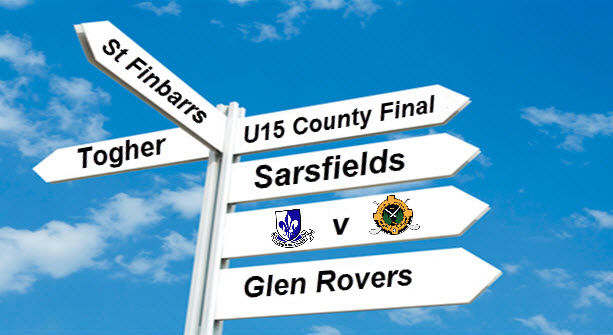 It’s only May and we are looking forward to the first Sars team to appear in a County Final in 2017.
The Under 15s are once again in the Final this year they face Glen Rovers.

Their Championship march began on 21/04/2017 when Sarsfields took on Ballincollig in Carrigaline winning well on a scoreline 2-11 to 0-5.
Next up was a week later was Midleton once again in Carrigaline were Sars proved too strong with an 8 point victory on a scoreline of 2-14 to 1-9.
So here we are ready for the final which takes place on Sunday the 7th May in Togher with action getting under way at 1 pm.
Glen Rovers are the opposition after they overcome Douglas and Kiltha Óg along the way.
Yet another Sars v The Glen County Final encounter.

Best of luck to Sean McCarthy his Coaches and all the team.
All support welcome.